Blogg The relevance of eco...

The City of Fortaleza has 2.500.000 inhabitants and an area of 314 km². Located in North-eastern Brazil, has semi-humid tropical climate according to Köppen-Geiger[1] climate classification and the average annual temperature is almost 27° C. 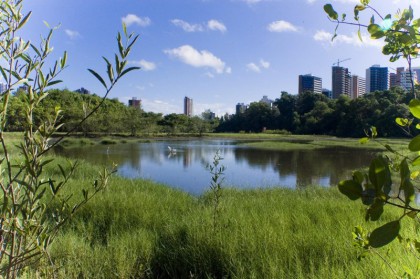 The Cocó River is born in the mountains Sierra Aratanha (City of Pacatuba) and travels 45 km to reach the sea and 25 km of its course in the city of Fortaleza. Along its route crosses 17 districts of the capital that have a population of approximately 340.000 people. It has 45 tributaries, 15 dams and 16 ponds. The Cocó River Basin occupies 60% of the municipal area and the total area of vegetation (10%), 3% is made up of mangrove, 17% by dunes and 13% by savannah vegetation[2]. Orientated in West to East, in the final stretch of the journey, it makes a wind corridor that leads the sea breeze to the downtown area, making the climate more pleasant to the city.

On the route through the City of Fortaleza, the river passes by a densely occupied area, with different characteristics along its course, from areas characterized by poor settlement until luxury condominiums in neighbourhoods of great real estate valuation, closer to the estuary. The river suffers the consequences of disorderly urban occupation of its banks and the disposal of various types of waste and sewage that cause major environmental impacts in the areas of mangroves, though the problem now is started to be reduced. The pressures of the real estate market on the still free land areas are also great, as well as illegal logging within the protected area.

Faced with these pressures on its ecosystem, the Cocó River gradually loses its important environmental benefits to the City of Fortaleza and hence the population’s quality of life tends to fall.

The ecosystem services provided by the Cocó River and its ecosystem are:

The great challenge is to highlight the potential of integration of ecosystem services of the Cocó River Basin in regulatory processes and urban planning of the city of Fortaleza through its identification and quantification along its course and its diverse landscapes, to be incorporated in urban legislation based on research and concrete data. Thus the social, economic, environmental and cultural values of the Cocó River will be entered urban planning Fortaleza.

This requires a diagnosis of the current conditions of the river and its surroundings, with the identification of environmental services provided by various landscapes and the creation and use of tools that consider them in planning and urban legislation.

The C/O City project in Sweden (which U&We initiated together with the City of Stockholm) has created 10 tools relating to ecosystem services that can be used in the river Cocó basin system, with adaptation to local realities: identification, evaluation, quantification, planning, indicators and monitoring and the Green Factor[5] are ways for be aware of the real meaning of the Cocó River and its basin to the city of Fortaleza.

Through the collaboration of C/O City Sweden and the creation of the Care of City Brazil, existing and created new tools can be tested and monitored according to local needs.

With the launch of C/O City Brazil in Fortaleza, on 9 of March 2016, with the participation of various actors, public entities and the Centre for Innovation in Technology, Resilience and Sustainable Urbanism (CITRUS) of the Federal University of Ceará, starts a cooperation seeking a city that integrate nature into the urban environment in search of a better quality of life for its inhabitants.

[4] TEEB – The Economics of Ecosystems and Biodiversity (2011). TEEB Manual for Cities: Ecosystem Services in Urban areas