Election days are a special event in my family. Long before I was allowed to vote, I would accompany my parents to the local gym hall to watch them put down their X’s. Late afternoon and evening we would follow the news as the results trickled in. Since then some outside parameters have changed, and I vote in a different country than the rest of my family. But it just so happened that I was in Luxembourg this weekend and took part again in the family traditions. We teamed up to go voting, and my brother worked at one of the polling stations. Afterwards, we sat in the garden, eating cake and celebrating democracy. We followed the preliminary results and voter turnout numbers as they started showing up. Nobody went to bed before the results had been confirmed.

It was an important election, and Europe has had a rough time to say the least: The migration crisis, anti-EU sentiments brewing in many countries, the rise of right-wing parties, the Brexit chaos, the ever-more visible effects of climate change…how times have changed.

The EU was established by societies who feared the past. Now, we fear the future.

Europe-wide, citizens are disillusioned. It is no longer necessarily true that the next generation will be better off, and citizens feel that their needs are not prioritized. There is a mistrust towards the “elites” and the media institutions to tell the truth. And many people, young and old, feel that too little is being done about climate change. Ahead of the elections, poll after poll in all European countries showed that people are feeling insecure about what is to come. This materializes in a loss of EU-phoria and a disregard towards “Brussels”. 400 million people had the chance to make their voice heard, and I was nervous about what was to come. Yesterday’s result showed a Green and Brown wave tear across Europe, breaking the two main centrist political groups’ decade long stronghold. 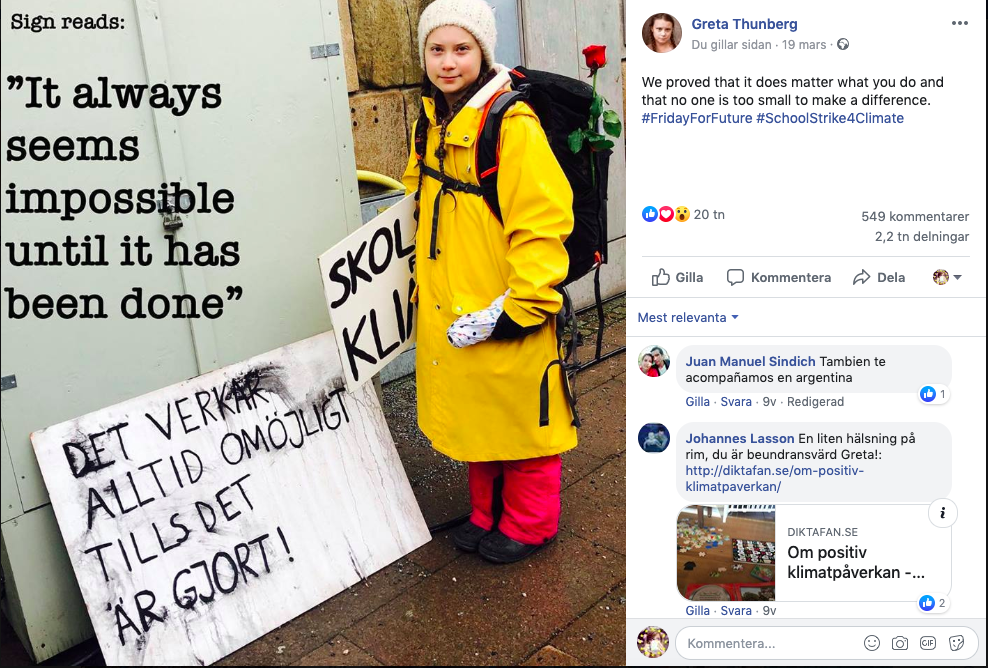 The Greta-Thunberg-effect – everywhere but at home

The Green Parties saw major wins in Germany, France, the Netherlands, Ireland, Belgium, Finland, the UK, and to everyone’s surprise even Portugal. In my native Luxembourg, the party increased with 3,9% to 18,91%. In Sweden, however, they dropped from 4 seats to 2. The country of Greta Thunberg, who has managed to mobilize millions to strike, where Fridays for Future began, does not join the rest of Europe in yesterday’s Green victory.

The saying No one is a prophet in their own land unfortunately seems to ring true.

While I am happy about the Green Wave, as well as the fact that the Brown Wave did not materialize to the extent that many polls had indicated, I am disappointed by the results in Sweden. Is it because the Swedes do not prioritize environmental issues and the climate crisis as much as they claim? The campaign posters would argue otherwise. Biking around Stockholm, you saw most parties campaigning with climate slogans, albeit promoting very different solutions to it.

Perhaps people in Sweden felt that this time, regardless of whom they voted for, it would include a plan for the planet. Green politics are certainly more mainstream in Sweden, and the Greens do not enjoy the same distinctive edge than their fellows on the continent. Compared to the last EU elections, their votes have gone down, but when compared to the national election in September ’18, their votes have almost tripled. So, a Greta-effect nonetheless.

It will be interesting to follow EU politics and how a much more fractured Parliament will fight to move things forward. I hope all new MEPs are skilled negotiators and will keep pushing for a future that prioritises the climate crisis and push for comprehensive solutions. As the latest UN IPCC report showed, we have only 12 years to limit a global catastrophe. It is time to be positive again when we think about the future. I hope, the new Parliament is up for the challenge.