Blogg The end of meat...

The Swedish meat consumption seems to be changing. Could we reach “peak meat” this year? Several articles last weekend discussed the historical paradigm shift the country seems to be going through. 85% of the food industry perceives that a “protein shift” is taking place and another study shows that every third Swede wants to eat less meat.

It seems that the top of the food chain is changing its behaviour.

“Peak meat” suggests that a society has reached the highest level of meat consumption and that the numbers will go down in the future. This phenomenon already occurred in the US over 10 years ago, also at a staggeringly high number. In 2004 it reached its peak at 83 kilograms (184 pounds) per person, and has since kept falling. 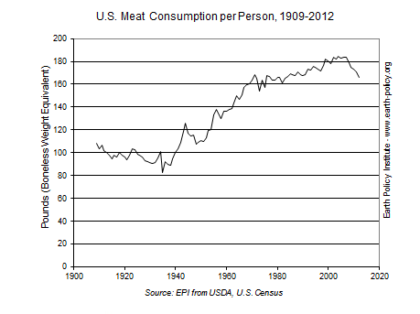 In many respects this is a positive development. We eat 7 times as much meat as we did in 1950. From an environmental perspective a shift towards less meat intense diets would give our planet some breathing space. Compared to anything other food, meat has, by far, the highest environmental impact. The infographic below has taken data from the United Nations and the University of Chicago among others shows to demonstrate this in an informative way.

As with most revolutions in society it is raised awareness among people that drive change, especially among the younger generation. It is their demands  that will bring about changes in the whole food industry and producers, restaurants, employers,…they better adapt.

What are your thoughts on this? Is your country experiencing “peak meat”?